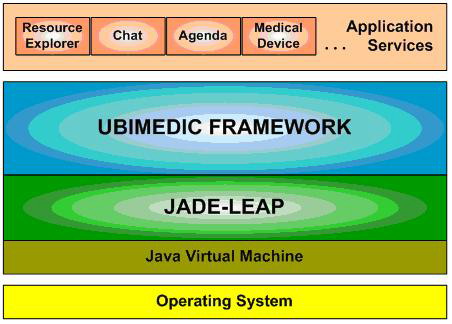 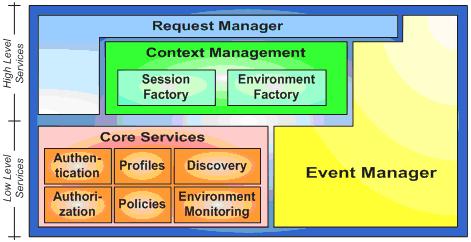 Ubimedic2 is multi-agent framework able to support the management of territorial emergences. It extends the idea of the former Ubimedic including introducing the idea of the operative units such as ambulances and hospitals which are involved in the coordination of the rescue operations. We propose a distributed approach where all the operative units using the agent technology, collaborates with each-other and arrange the coordination of the rescue operations. Agents support the medical staff in the decision making process, collect and store digital data patient, collaborate for a better use of the resources still keeping the ability to succeed in their task in absence of communication. 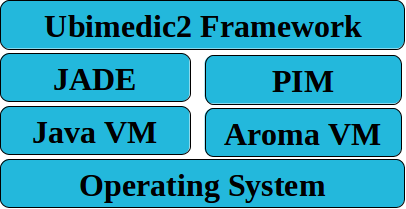 Service agents (SA) are the agents that represent devices.The device can be a medical one or a simple notebook or PDA that human operators use to insert data or read data taken from the medical devices such as oximenter, ECG and defibrillator. These kind of device has limited functionality and there is no decision making. We divide this agent typology in two categories

Device Service Agent (DSA) is the agent that represents the medical device in use by the operators. The device uses an agent to interface with the rest of the world offering a determined service or information. This is the most simple agent in our architecture. It simply responds to a request by returning the requested data. Devices usually operate in a limited area depending on the environment they are placed in, like the vehicle or the hospital division.

Client Service Agent (CSA) is the agent that represents the client interface device of an operator. The device is used as input/output device where an operator inserts the necessary information and examine the patient file. This device can be notebooks, PDAs, smart-phone, etc.

Mobile Operative Agent (MOA) is the agent that represents a mobile unit like: ambulance, medical car, helicopter, etc. This agent communicates with service agents (representing devices mounted on the vehicle) in order to receive the necessary information and other mobile and fixed agents in order to organise the operation.

Fixed Operative Agent (FOA) is the agent that represents a fix unit like hospital or temporary treatment camp, etc. This agent communicates only with mobile operative agent when they receive a request to accommodate a patient with a determined pathology.

The Activator is a agents in charge of activating the other agents when units are ready to be used and of deactivating them when the units aro no more available. It receives the request from the human operator when a new operation is needed, asks for the activation of the standby units when necessary, etc. 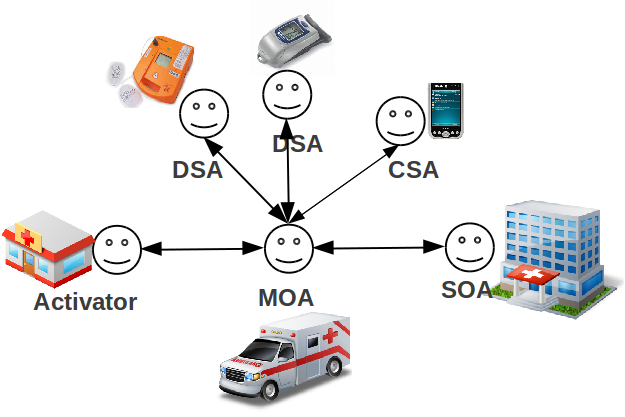 The Activator agent, after receiving a new task from the Operative Centre human operator, assigns it to one of the ambulances available. As a first step the Activator asks the MOA for its availability sending a request message (Step 1) negotiating the new task. If the operative unit represented by the MOA is not processing another task, the MOA accepts the request replying with an Accept message (Step 2) and the Activator sends the necessary information (such as location, expected pathology and seriousness) for the new task (Step 3). If the MOA is not ready to receive a new task, it responds with a Refuse message. In this case steps 1 and 2 are repeated with another MOA.

Once at the place, the MOA begins collecting health information from different DSAs (Step 4) representing medical devices such as ECG or Oximenter present at the operative unit through. Other health information is collected from the CSA (Step 5) representing hand-handle devices, such as smart-phone or PDA used by medical staff. All data collected from the MOA are stored into a database together with the patient personal information such as name, surname and age. The data collected from the different medical devices are sent to the CSA from the MOA so the medical staff can visualize these data using the hand-handle device (Step 6). With a pre-configured frequency, the MOA elaborates the data collected and decides which is the most relevant pathology effecting the patient and the seriousness of it. If there are more pathologies affecting the patient, the most relevant one will be taken into account. An example of the order of priority the is the following: Cardiology, Respiratory, Spinal trauma, Head and Facial trauma, etc.

After the MOA has detected the pathology, it retrieves from the database all the hospitals that treat that pathology and sends the SOA representing the nearest hospital the request to host the patient (Step 7). The SOA, considering the available resources, can accept the request sending to the MOA an Accept message or can refuse it (Step 8). If the SOA refuses the request, the MOA asks the SOA representing the next nearest hospital. If no SAO that represents the hospital in the territory respond, the MOA will chosen anyway one of the hospitals. The policy of selection can be the closest one or randomly one of the hospitals. During time, the health conditions of the patient may change getting worse or with the emerging of a more relevant pathology. This means that the MOA can take another decision about the hospital where to send the patient and the steps 7 and 8 are repeated again in order to negotiate the hospital where the patient can be brought. Anyway, reached a pathology with high relevance, the MOA will not change the pathology to a less relevant one even if health parameters turn to be in range, because of medical considerations. 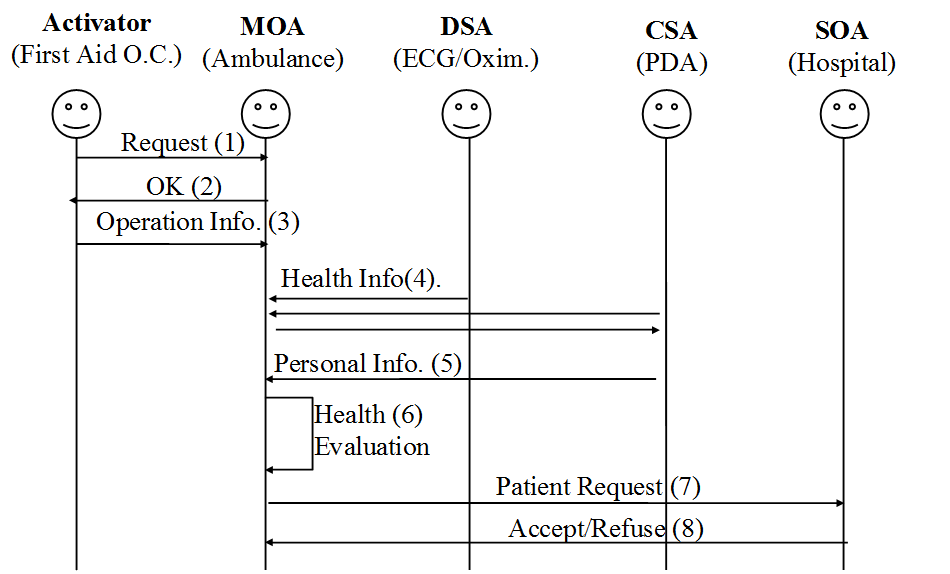 JADE has released an add-on for the Android OS in order to integrate the mobile devices to the platform. This gives to the user the possibility to extend their system to the mobile devices. Due to the low computation capacity of mobile devices, JADE uses a split model for the agents being executing on the device platform. An agent is represented by the "front-end container", running on the mobile device, and by an "back-end container", running on the server (by server we mean any device with larger computation such as personal computer and server). The core functionality of the agent resides on the back-end container and the front-end one interfaces with the user interface built over the Android OS to exchange data. The data exchanged and different computation location the is transparent to the user. 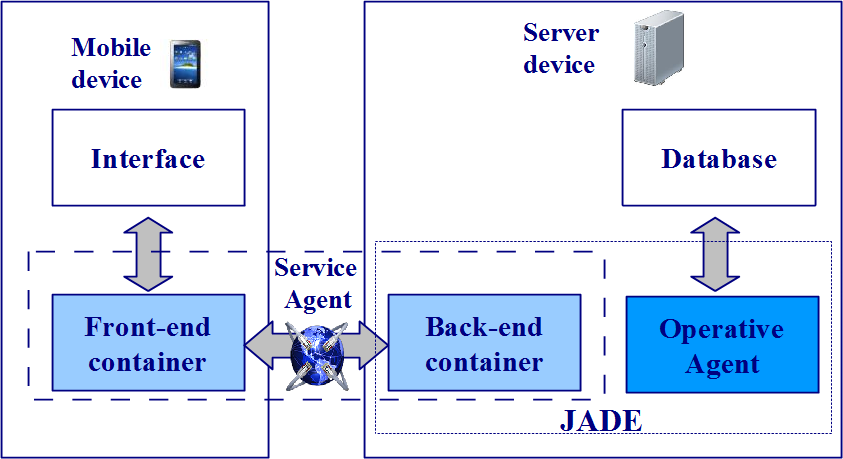 The Controller Process (CP) is not an agent but a process. One CP is created when a new operation needs to be performed. It is a PIM process that will navigate over all the mobile agents that are involved in the operation in order to control the overall operation. It is like the operative centre and is necessary to hold some knowledge that is not under the mobile units competence. For example, when other ambulances are necessary, the controller activates the request for other ambulances and wait till other medical units are ready to be used (in our context, when other agents are activated and are in the ready status). 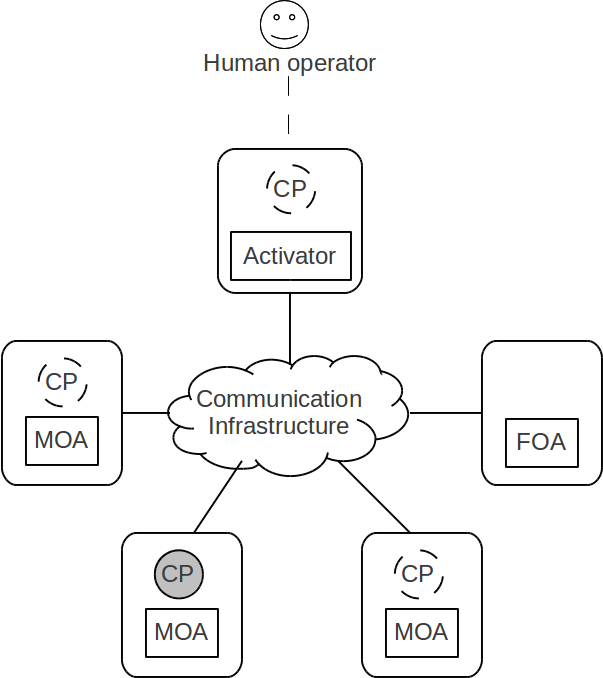