Before talking about managing fault tolerance, we should take a brief look at the current PIM architecture. Here we have a simplified statechart that points out the different phases of the PIM's life.

As we can see, the current approach doesn't consider the possibility of network or hardware failure. In fact, after a first initialization phase, each node tries to connect to his next and previous nodes, using the settings loaded from the configuration file. In the case of failure, execution cannot continue because the ring is broken and nothing can fix it.

Here it is a summary of what we would like to achieve:

Our first effort consisted in integrating the GroupManager in the PIM, so that we could manage PublicPeerGroups.

After this phase, we are currently trying to modify the PIM architecture in order to achieve a fully dynamic procedure to establish connections, so that we don't have to rely on the configuration file. Our idea is to exploit the GroupManager functionality and create an ordered list of peers. This list is local to each node and will constantly be updated after each newPeer and deadPeer event from GroupManager.

Another possible modification which we are working on is a mechanism to identify which node currently holds the most recent backup version of the CP. As for now, we would like to include the CP version number in each GroupManager packet that a node sends to the others. This should allow us to know what version is currently stored on each node, by simply looking at the ordered list of peers.

These modifications (the GroupManager integration, the fully dynamic connect procedure and the CP backup copy versioning) should allow us to reach our objectives, as presented in the following statechart. 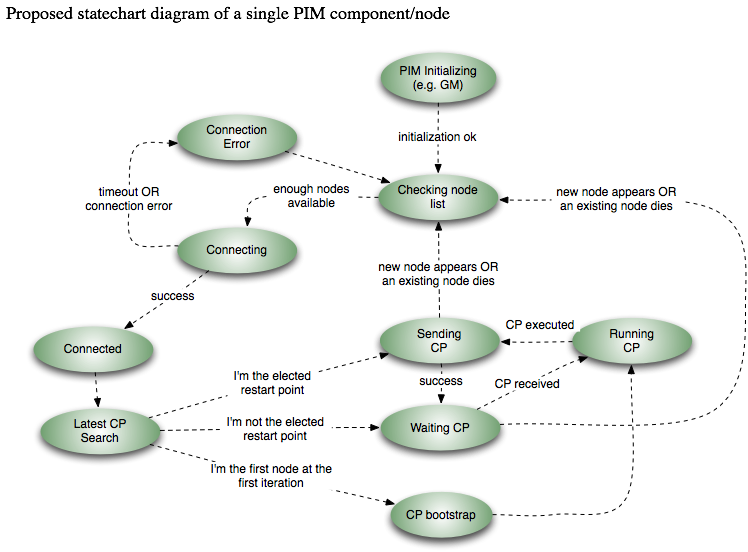 As for the notification of new or dead nodes, we have defined a static method inside the PIM_Runtime that should be executed by the GroupManagerListener. First of all, this method interrupts the PIM runtime thread, unblocking it from the read of the prevNodeSocket. Then it should prepare the system recovery. As for now, we choose to focus our attention on this aspects, so that the reconnection phase will involve every node, not only the two neighbors of the new/dead node.

The notification of a dead node cannot be done just by looking at the sockets. The reason is that if a node fails in a bad way (e.g. hw failure or sudden disconnection from the network) the socket remains open for a long time. Two other approaches are possible:

The fully dynamic connect procedure has some interesting consequences: exploiting the UUID list we could dynamically choose not only how many nodes should be present in our connection ring, but also how many nodes need to be present before the CP start and the maximum number of possible members.

Furthermore, we should dynamically change the ping interval of the GroupManager (and obviously the time after which a non-sending peer is considered dead). In particular, we could choose this interval depending on the roundtrip time. This will lead to more relaxed intervals for longer RTT, and to higher responsiveness only when it is really needed.